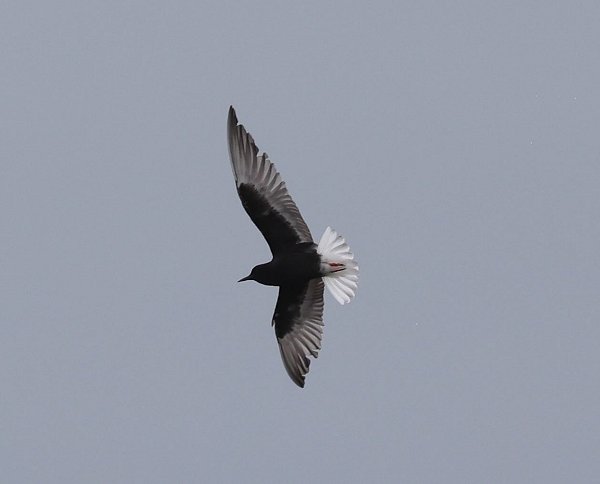 Another super month for good birds at Rye Harbour saw at least three notable rarities on the reserve. On 4th of the month a female Montagu’s Harrier passed over the Beach Reserve heading east, while an adult summer plumage White-winged Black Tern was present at the Quarry on the 11th. The best was yet to come however, with a brief sighting of a Black Kite over the Discovery Centre on the 15th.

Several of our breeding waders produced their first chicks during May, with Lapwing, Ringed Plover, Oystercatcher and Redshank all falling into this category, as well as Avocet which saw a flush of newly hatched young late in the month. This month also saw the first Black-headed Gull chicks on Ternery Pool. After a promising start Sandwich Tern have not nested on the reserve this year, though there are around 70 pairs of Common Tern and eight or nine pairs of Little Tern on the Beach Reserve. Small numbers of passage waders included Ruff, Black-tailed Godwit, Bar-tailed Godwit, Grey Plover, Dunlin and Sanderling, with the highlights on Flat Beach Level two Curlew Sandpiper on the 25th and a Little Stint on the 4th and 18th, while Wood Sandpiper were present on Ternery Pool on the 1st and at Castle Water on the 14th and 22nd. Notable waterfowl sightings included the long-staying Black-necked Grebe (over a year now!), Garganey on several date (with two at Castle Water on the 5th), a Bittern booming at Castle Water on the 14th

Generally cool weather meant that catches in the moth trap were not what might be expected at this time of year. Little in the way of highlights though an Oblique-striped and a Reed Dagger on the 3rd were notable. Similarly butterfly numbers were low this month, though there were several sightings of Painted Lady and the odd Red Admiral. Other rare invertebrates recorded during May were numerous Variable Damselfly at Castle Water on the 9th, Great Silver Water Beetle in the moth trap on Harbour Farm on the 18th and the rare weevil Limobius mixtus at Castle Water on the 19th. May also saw the first sighting of the uncommon Brown-banded Carder Bee, with queens on Harbour Farm on the 29th. Plants in flower during May included Sea Pea, Bee Orchid, Common Spotted Orchid, Wild Carrot, Grass Vetchling, Sea Kale, Yellow Horned-poppy, Viper’s Bugloss, Yellow Vetch, Birdsfoot Trefoil and Houndstongue. In addition, two plants of Wild Clary were found near the Viewpoint, the first reserve record since 2004.