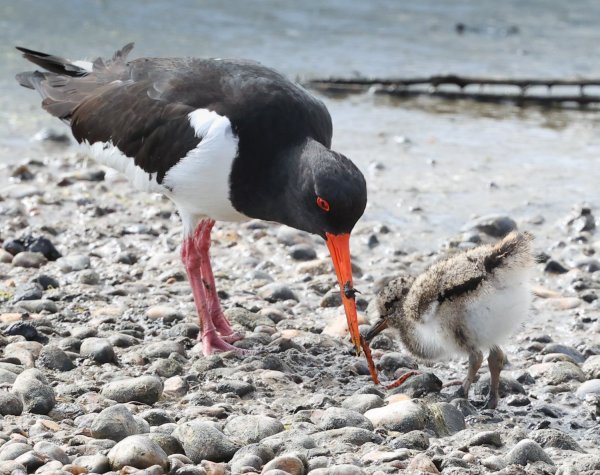 The breeding season has reached a peak this month, and in many respects it seems to have been a pretty good one! Our Oystercatcher seem to be having a particularly good year, with at least 18 broods of 32 chicks and at least two fledglings, counted on the 19th. On the same date at least 55 Avocet with 36 chicks (including two fledglings) and at least three broods of Ringed Plover of various sizes (including at least one fledgling) were seen, while our Lapwing and Redshank have fledged at least one chick each so far. This month saw the first fledglings from around 150 pairs of Black-headed Gull, with around 10-15 present on the Beach Reserve at the end of the month, while at least nine pairs of Little Tern nested on Flat Beach this year, with the first fledglings appearing towards the end of the month. In addition around 40 chicks from roughly 70 pairs of Common Tern were counted on the 19th.  One of the few negatives this year is the apparent absence of Wheatear as a breeding bird on the reserve (though one pair may have bred on Harbour Farm).

Signs of the advancing year included a steady stream of migrant waders returning from their northern breeding grounds. This included a Green Sandpiper at Castle Water on the 21, up to 48 Black-tailed Godwit, also at Castle Water, and small numbers of Curlew, Whimbrel and Grey Plover. Small flocks of Lapwing, with at least 60 on Harbour Farm on the 19th, were also a sign of the advancing season. Wader highlight was a summer-plumage Curlew Sandpiper on Harbour Farm on the 23rd and 24th. Notable waterfowl during June included the long-staying Black-necked Grebe and an adult Spoonbill on the 20th, both at Castle Water. Raptors included Marsh Harrier on several dates, Hobby at Castle Water on the 2nd with the highlight being a Red Kite on the 21st, while a Barn Owl was present at Castle Water on the 12th and on the Beach Reserve on the 16th. Little in the way of notable passerine sightings during June, with the highlights being several sightings of Cuckoo, Yellow Wagtail and Bearded Tit at Castle Water.

An excellent month for moths saw the first reserve record for Hornet Clearwing at Castle Water on the 21st, only the second record of the very rare immigrant Barred Silver on the 20th, a Beautiful Marbled on the 27th and several records of Sussex Emerald. Other notable invertebrates during June included the rare jumping spider Pellenes tripunctatus and Phlegra fasciata, the rare weevil Lixus scabricollis on the Beach Reserve on the 12th and several male Long-horned Bee on Harbour Farm on the 24th, while the uncommon Silvery Leafcutter Bee and parasitic fly Mintho rufiventris were found at Castle Water on the 21st. Plants in flower during June included Sea Pea, Sea Milkwort, Viper’s Bugloss, Herb Robert, Biting Stonecrop and Birdsfoot Trefoil.