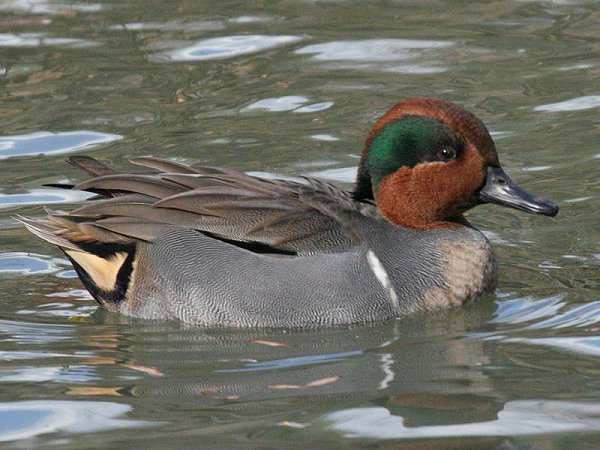 Bird highlight this month was a male Green-winged Teal that was present on the Beach Reserve and new saltmarsh from 2nd to the 5th. This tiny North American duck, a close relative of the familiar European Teal, is a scarce vagrant to the UK, with perhaps 40 to 50 records a year, though this is the first time this species has been recorded at Rye Harbour.

Good numbers of waders included 600+ Golden Plover on the 13th, 460+ Oystercatcher on the 3rd and 150 Dunlin on the 4th. In addition, a maximum of 110 Snipe were on Ternery Pool on the 17th, 72 Avocet, 50 Grey Plover, 40+ Sanderling and 20+ were recorded on the Beach Reserve during March. The highlight were probably two Jack Snipe on two occasions, at Castle Water on the 11th and Harbour Farm on the 24th, up to five Ruff and small numbers of Black-tailed Godwit. The long-staying Black-necked Grebe and Spoonbill were still present at the start of March, the former reported up to the 28th, the latter only to the 7th, one or two Cattle Egret were present on the reserve from the 27th and three Goosander offshore on the 3rd. A Great White Egret was over the Beach Reserve on the 4th, a male Garganey was seen at Castle Water on the 16th and Bittern were recorded at Castle Water on the 2nd and 10th. In addition, a White-fronted Goose was present on Flat Beach on the 24th and Ternery Pool on the 25th, while a Pink-footed Goose was on

Castle Farm on the 26th. March also saw the last of the winter’s Goldeneye, with a male on Long Pit on the 3rd. The first Sandwich Tern was recorded offshore on the 6th, with a maximum of 21 recorded on the 20th on the Beach Reserve, while February’s Iceland Gull was still present on the Beach Reserve from the 1st to the 6th, and a Caspian Gull was reported on Flat Beach on the 3rd. Raptor highlight this month were at least two (and possibly three) Red Kite over the reserve, part of what appeared to be something of an influx in the area. Apart from this, the usual suspects with regular Marsh Harrier and Peregrine and the occasional Sparrowhawk. The only owl sighting this month was a Barn Owl over Long Pit on the 3rd. Notable passerines this month included the first Wheatears of the year on the Beach Reserve on 11th, 22nd and 27th (scarcer than usual), the first singing Sedge Warbler on Harbour Farm on the 30th  and a Swallow on the same date, the first Sand Martin on the Beach Reserve on the 31st, Black Redstart at Watch Cottage on the 29th, Rock Pipit on the saltmarsh on the 20th and Bearded Tit on several dates at Castle Water and on Harbour Farm. Raven were also seen on several dates around the reserve, both Blackcap and Chiffchaff were heard singing on the reserve and a Bullfinch was seen regularly around Narrow Pit.

Moth trap numbers were very low during March and consisted of a small number of spring species such as Common Quaker, Small Quaker, Clouded Drab, Early Grey, Hebrew Character and Oak Beauty, while butterflies included Small Tortoiseshell, Peacock, Comma and Brimstone. March produced two new species for the reserve, with a larva of the tiny case-bearing moth Luffia ferchaulatella found at Watch Cottage on the 19th and the weevil Rhinocyllus conicus recorded at the viewpoint on the 17th.  This month also saw the first records for 2022 of the rare Vernal Colletes bee at Castle Water. In addition, a bat recorder was run on the night of the 22nd and recorded Common, Soprano and Nathusius’ Pipistrelles. Plants in flower included White Deadnettle, Red Deadnettle, Common Whitlowgrass, Danish Scurvygrass, Coltsfoot, Dandelion, Persian Speedwell, Blackthorn and Grey Willow.