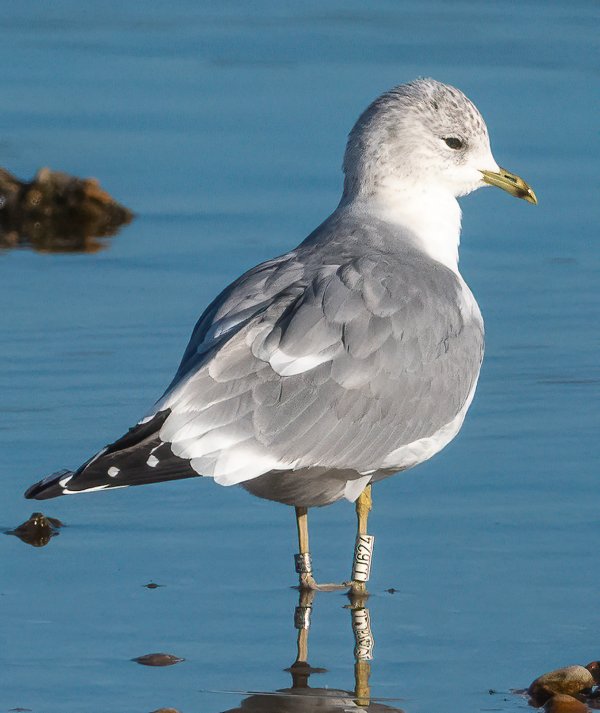 On 30th January regular visitor John Willsher photographed a ringed Common Gull on the reserve and was able to read the number on the ring. It turns out that this bird, JJ624, was ringed as an adult on 26th June 2018 at Stavanger in southern Norway and seen there again on 15th April 2020, so probably breeds there. Stavanger is a total of 947km away from Rye Harbour Nature Reserve!

Highlights included a male Goosander on Harbour Farm on the 7th and Long Pit on the 13th, regular Spoonbill, the long-staying Black-necked Grebe at Castle Water and a Red-crested Pochard at Castle Water on the 25th and 31st. In addition, the Great Northern Diver was still present on Long Pit up until the 13th. This month also saw the first record of Mediterranean Gull for the year, with a singleton on the Beach Reserve on the 12th, while a 2nd year Caspian Gull was seen at Castle Water on the 7th.

Raptors included regular Buzzard and Marsh Harrier (with at least three at Castle Water on the 13th) Merlin on Harbour Farm on the 1st and the Beach Reserve on the 13th, while a pair of Peregrine were seen regularly around the reserve, including seeing off a pair of Raven on the 20th! The only owl sighting this month was a Barn Owl which was present on Harbour Farm on the 13th. Passerine highlight this month was a Lapland Bunting seen briefly on the Beach Reserve on 25th. Apart from that there was little in the way of passerine sightings during January, with regular Chiffchaff and a flock of 56 Pied Wagtail at Castle Water the only other records of note.