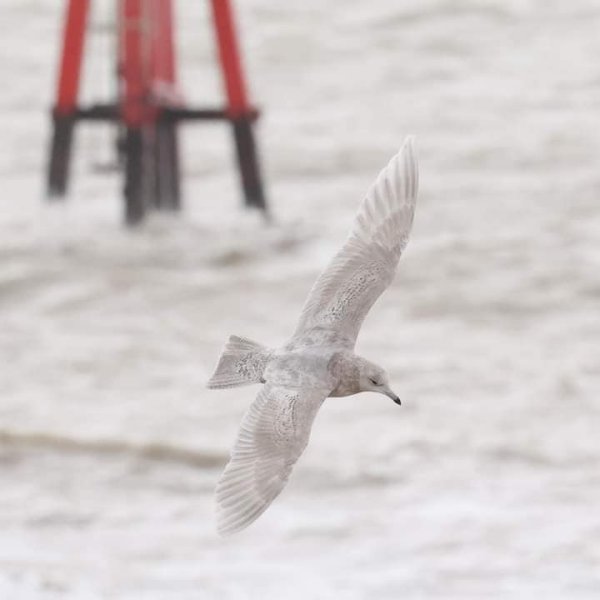 The wildlife highlight this month was a second year Iceland Gull which was present on the Beach Reserve from the 23rd to the end of the month. This medium-sized ‘white-winged gull’ breeds in Canada and Greenland (though not Iceland – it only occurs here as a winter visitor) and regularly winters in the British Isles. However, at Rye Harbour there have only been a handful of records of this species, with last of these in 2003!

On the 16th a count on Flat Beach found 2000+ Golden Plover, 200+ Dunlin, 60+ Grey Plover, 60+ Turnstone, and over 20+ Knot, while up to 420 Oystercatcher, 400 Lapwing, 60 Sanderling and 44 Redshank were also present during the month. There were also occasional sightings of Ruff on the reserve, including nine at Castle Water on the 28th. Several sightings of Avocet this month included 22 on Harbour Farm on the 24th, and a bird originally ringed on the south coast of France as a chick 12 years ago. While not as high as January’s figures there were still some decent counts of waterfowl during the month. On the 20th at least 406 Wigeon were present around the reserve, 150 Shoveler were present at Castle Water on 25th , 55 Pochard on Long Pit on the 5th and 50 Tufted Duck on the

20th. This month also saw small numbers of Goldeneye on several dates on Long Pit and at Castle Water, with a maximum of five on Long Pit on the 5th while there were also small numbers of Pintail mid-month and a Brent Goose was present on Harbour Farm on the 20th. Highlights this month were the long-staying Black-necked Grebe on Castle Water (joined briefly by a Slavonian Grebe on the 22nd), a Red-breasted Merganser on Flat Beach from 27th and Spoonbill throughout. In addition, a White-fronted Goose was present on Ternery Pool on the 27th. Raptors this month included regular Marsh Harrier, Kestrel, Sparrowhawk and Peregrine, while a Barn was seen at Castle Water on the 25th. There was little in the way of notable passerines during February, though a Bullfinch at Narrow Pit on the 7th was good to see and there were several records of Stonechat and two Raven over the Beach Reserve on the 9th.

It was still largely too cold for invertebrates on the reserve during February, with the only sightings being Yellow Dung-fly, the ‘bluebottle’ Calliphora vicina, the ‘housefly’ Helina evecta and Green Shield-bug at Castle Water late in the month, while there were several sightings of unidentified bumblebees (probably queen Buff-tailed Bumblebee). Plants in flower during February included Gorse, Sweet Violet, Common Whitlowgrass, Coltsfoot and Cherry Plum.