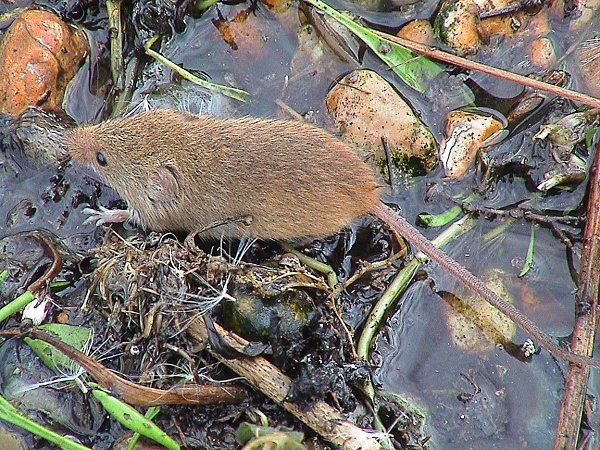 This month a team from the Mammal Society came to carry out a survey for Harvest Mice on the reserve and met with much success! This elusive and secretive mouse is Europe’s smallest rodent and the only one with a prehensile tail which it uses to help climb grass stems. It typically occurs in cereal fields (though will use a range of grassy habitats) and in the past would have been encountered in numbers during harvest time, hence its name. Harvest Mice have been known to occur on the reserve for many years though the number of records was limited. However, the survey on a small part of Harbour Farm on the 5th found over 20 nests, both old and new.

A good range of waders were recorded this month, with most of the big counts during the monthly Wetland Birds Survey on the 19th. This included 1500+ Golden Plover, 900+ Lapwing and 250+ Oystercatcher, while 200+ Dunlin and 42 Ringed Plover were present on the shore on the 12th. Best of the bunch wader-wise were three Avocet on Flat Beach on the 26th, a Jack Snipe at Castle Water on the 23rd and up to 10 Ruff, also at Castle Water. Waterfowl highlights this month were a Cattle Egret at Castle Farm on several dates early in the month and a male Red-crested Pochard on Castle Water on the 24th. In addition, a Great Northern Diver was present on Long Pit from the 19th to the end of the month, with a ‘redhead’ Goosander here from the 16th to 19th, the long-staying Black-necked Grebe

was on Castle Water throughout and there were regular sightings of Spoonbill. Some decent counts this month included a total of 17 Great White Egret on Long Pit on the 16th, the highest count ever for this species in the Rye Bay area and 38 Pintail on Flat Beach on the 7th, the second highest count for the reserve. Raptors during December included regular Marsh Harrier, with three at Castle Water on the 1st, and Merlin here on the 1st and 24th, while owls included Barn Owl on several dates and Short-eared Owl over Harbour Farm on the 4th. Passerine highlight this month was a Dartford Warbler reported on Harbour Farm on the 2nd, while Black Redstart were recorded on several dates and included three near the viewpoint on the 1st. In addition, eight Siskin were recorded at Castle Water on the 16th, an unseasonal record for Rye Harbour, while six Greenfinch on Flat Beach on the 18th was a good count for this increasingly uncommon species!

There was little in the way of invertebrate sightings during December, though a freshly dead male Minotaur Beetle at the discovery centre on the 7th was only the fifth reserve record and the first ever male! Apart from the Harvest Mice the only notable mammals records this month were of Nathusius’ Pipistrelle recorded by bat-logger on the 14th and a Soprano Pipistrelle on the 15th! The mild weather did result in many plants flowering out of season including Yarrow, Teasel, Red Clover, Great Mullein, White Deadnettle, Viper’s Bugloss, Bristly Oxtongue, Red Valerian and Wild Carrot!

Viper's Bugloss in flower in December!