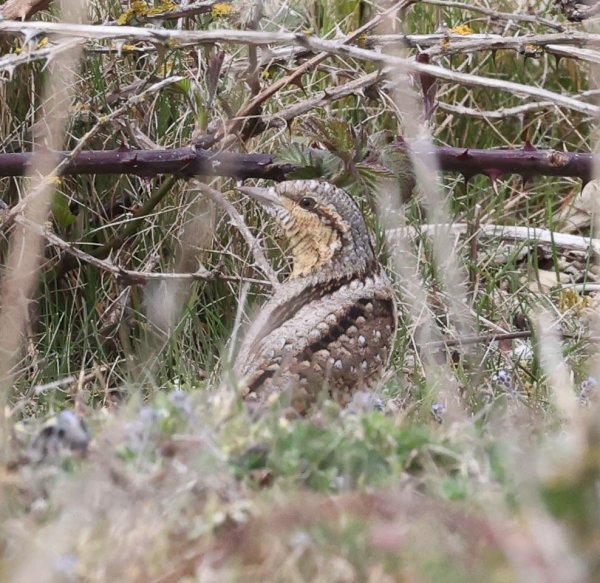 Top bird spot on the reserve during April was shared by three species this month! On the 22nd a Kentish Plover was seen at the River Mouth (then on Camber Sands on the 23rd), while a Ring Ouzel was present near the viewpoint on the 23rd. Finally, on the 25th, a Wryneck was found on Flat Beach during a Sussex Wildlife Trust event, a real treat for all involved!

Waders during April included up to 76 Bar-tailed Godwit, 25 Whimbrel and around 10 Grey Plover, as well as small numbers of Dunlin, Sanderling, Golden Plover, Ruff, Black-tailed Godwit and Knot. Breeding birds included six or seven pairs of Lapwing and perhaps three pairs of Little Ringed Plover. The best of the bunch was a Jack Snipe at Castle Water on the 6th. Waterfowl highlights were several sightings of Garganey on the Beach Reserve and at Castle Water and the long-staying Black-necked Grebe, booming Bittern and Great White Egret at Castle Water. Best of the raptor sightings was a Red Kite at Castle Water on the 15th, while this month also saw the first records of Hobby for the year with several records late in the month, and up to five Marsh Harrier at Castle Water. By the end of April all of our breeding seabirds had been recorded. A count on the 27th found around 150 pairs of Black-headed Gull on the Beach Reserve as a whole, with around 40 pairs of Sandwich Tern and at least one pair of Common Gull on Ternery Pool. Elsewhere on the Beach Reserve up to six Common Tern and four Little Tern were present.

April saw an influx of warbler species around the 10th/11th, with Sedge Warbler, Reed Warbler, Whitethroat and Lesser Whitethroat all singing by the end of the month. There were also a few records of singing Willow Warbler. Hirundine records were relatively sparse, with only small numbers of Swallow and Sand Martin and a few House Martin in Rye Harbour Village, while five Swift were reported at Castle Water on the 30th. On the Beach Reserve numbers of Wheatear were low for the time of the year (though perhaps three pairs were around by the end of the month), while at Castle Water two Yellow Wagtail were present on the 15th and at least one brood of fledged Bearded Tit were seen on the 28th.

The continuing cold weather during April meant that it was still very poor for moths, with only a handful of early spring species caught in the moth trap. There were, however, a couple of records of Great Silver Water Beetle and a very early Reed Dagger and a male Minotaur Beetle on the 19th. Invertebrate highlights were several males of the rare picture-winged fly Chetostoma curvinerve on the 7th and a male of the equally rare Banded Mining Bee on the 28th, both at the northern end of the Barn Field, and both firsts for the reserve, while a record of Three-spotted Jumping Spider on the Beach Reserve the 3rd was the first of the year. Plants in flower during April included Hawthorn, Blackthorn, Rue-leaved Saxifrage, Ivy-leaved Toadflax and Ground Ivy.